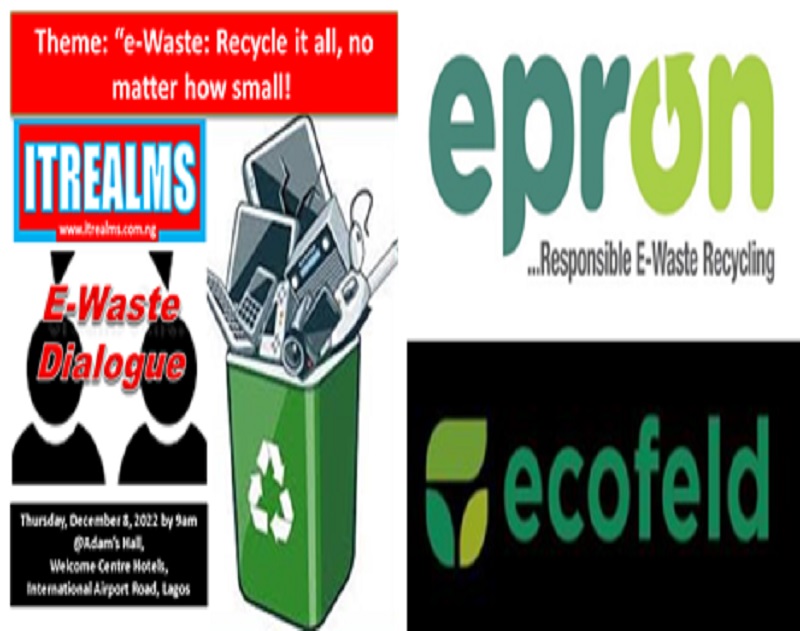 The trio of Galaxy Backbone Plc, Internet Exchange Point of Nigeria (IXPN) and Association of Licensed Telecom Operators of Nigeria (ALTON) have drummed up support for the 2022 ITREALMS E-Waste Dialogue.

The event scheduled for Thursday, December 8 at the Welcome Centre Hotels, Lagos under the theme, ‘e-Waste: Recycle it all, no matter how small!’ according to the Group Executive Editor, ITREALMS Media, Mr. Remmy Nweke, who made these disclosures at the weekend in Lagos, revealed that the Managing Director/Chief Executive Officer of Galaxy Backbone Plc, Prof. Muhammed Bello Abubakar, would be speaking to ‘Recycle it all for e-governance’.

Galaxy Backbone, he said,  is an ICT services provider in Nigeria since 2006; providing network management, communications and digital infrastructure services to organisations in the public and private sector, as well as hosting and cybersecurity services.

Nweke also said that ALTON is a body corporate, officially recognized by the Government of the Federal Republic of Nigeria and the Nigerian Communications Commission as the official industry body for all providers of telecommunications and subsidiary services in the country.

Further, he noted that IXPN, a non-for-profit and membership based organisation that provides a platform for networks to interconnect directly within Nigeria, to ensure that local Internet traffic remains local, rather than having to transcend boundaries of different countries before reaching its recipients within the same locality.

Meanwhile, the Director-General of the National Environmental Standards and Regulations Enforcement Agency (NESREA), Prof. Aliyu Jauro, had confirmed to keynote at the 2022 ITREALMS E-Waste Dialogue.

ITREALMS Media inc, he said, is holding the event in continuation of commemoration of the International E-waste Day (IeWD) 2022, under its flagship ITREALMS e-Waste Dialogue.

He underlined that this year’s commemoration of the International E-Waste Day focuses on small, end-of-life electrical and electronic appliances which presents a significant challenge with items such as cell phones, electric toothbrushes, toasters and cameras often discarded incorrectly.