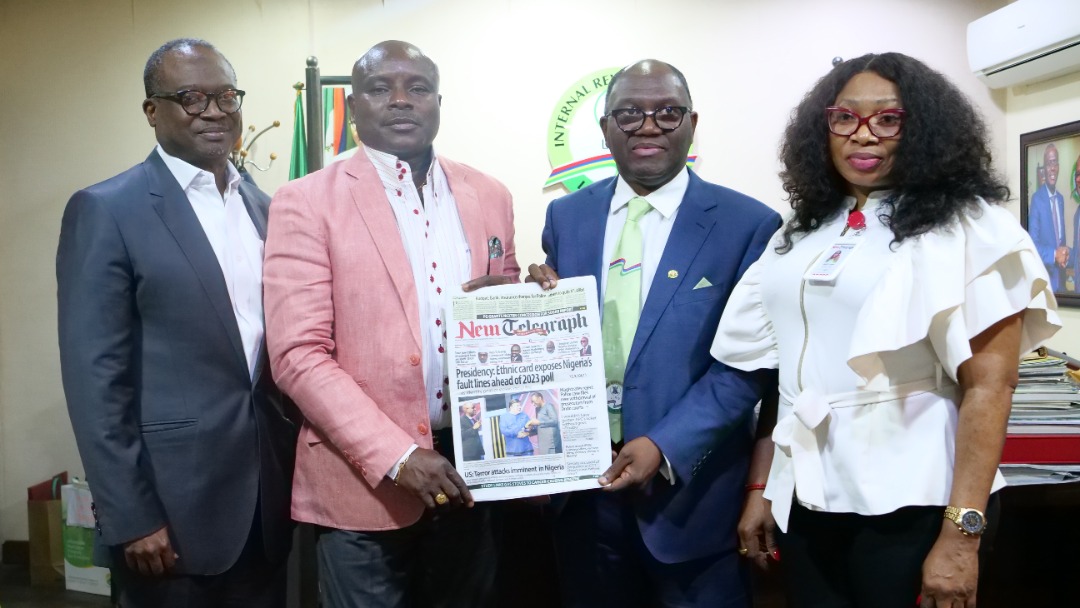 The executive chairman of the Lagos State Internal Revenue Service, LIRS, Mr Ayodele Subair has attributed the success of the unprecedented tax revolution being witnessed in the state, where about 70 per cent of its income is internally generated, to the visionary leadership of the former State Governor and the All Progressive Congress, APC, Presidential candidate, Asiwaju Bola Ahmed Tinubu and the incumbent Governor, Mr. Babajide Sanwoolu.

Subair made this submission at his LIRS office in Alausa, when the management of the Daily Telegraph Publishing Company Limited, publishers of New Telegraph Newspapers led by the Managing Director, Ayodele Aminu and the Daily Editor, Juliet Bumah paid him a courtesy visit to intimate him about the decision to honour him with an award of leadership excellence at a ceremony to be held later in the year.

While thanking the New Telegraph newspapers for finding him worthy of being honoured as a result of the huge successes being recorded by the agency, the LIRS boss submitted, “Testament to our former governor, Asiwaju Ahmed Tinubu who had that vision to create some independent agencies like the LIRS and making the state to be less reliance on the federal government’s allocation.

He is the father of this tax revolution in Lagos State. So we always must give him that credit. Since he made the LIRS board autonomous, the numbers have been leaping in bounds and we hope to continue on that trajectory because we have to provide the funding for the state.The incumbent Governor has been very supportive of our innovations and fresh ideas in tax administration in Lagos State.”

Speaking further, Subair noted, “The joy is when there is a bit of recognition, then you feel justified, you feel happy that you have spent all those long hours burning candles at night and so on and so forth justifiably. I’m very pleased that you have deemed it fit to honour myself and the agency at large. I assure you that management would be well represented at the actual award ceremony God’s willing.

“It is a moment like this that we feel very glad that we have put ourselves at the service of our dear state. Most of the time, we don’t get any recognition either internally or externally, rather it’s always you can do better. But in our world, our numbers speak for themselves. In your letter, you said we almost doubled our internal revenue generation since the inception of our tenure, but in actual fact, it’s more than double.

While commending the staff of the LIRS for their dedication and steadfastness, the LIRS boss said, “We are delighted that we have been able to achieve all those things. It’s all from dedicated leadership and followership. The staff play a very big role in making our numbers rise. Management directs and formulates the policies, and all the various processes that generate such income, but at the same time we need to commend the foot soldiers, they are the ones out in the field who help us to advocate for taxpayers to try and be tax compliant, to respect the social contracts, and to understand that if they want the state to improve in terms of provision of infrastructure and quality services, they need to also make a contribution.”

Subair advised Nigerians especially Lagos residents not to relent in their duties by paying their taxes regularly and diligently as it would help the government provide infrastructure and social amenities as attainable in developed countries.

“Everybody goes to the UK, U.S and they are all marvelled at the level of their infrastructure, good road network, free education, electricity and all other things. All these are made possible because the people are highly tax-compliant in that clime. Nobody is chasing anyone about paying taxes. If you don’t pay tax, the sanctions are there. People go to jail. There are no two ways about it. But unfortunately in Africa, extended to Nigeria and in Lagos, people don’t want to really pay tax.

“Yes, globally, people don’t want to pay, if they could avoid it, they would avoid it, So it makes our job very difficult and trickier.

“The federal government is not getting much from the oil industry like before. So it is just what FIRS is doing that is really helping. Likewise in Lagos, all the federal receipts have gone down considerably, so it’s mostly what we are generating here along with some other revenue-generating agencies,” he said.

Earlier, the Managing Director of the Daily Telegraph Publishing Company Limited, Mr Ayodele Aminu noted that in keeping with its commitment to rewarding individuals and businesses in Nigeria that have distinguished themselves by their remarkable contributions to the development of the country in both the public and private space, the LIRS boss was found worthy to be appreciated.