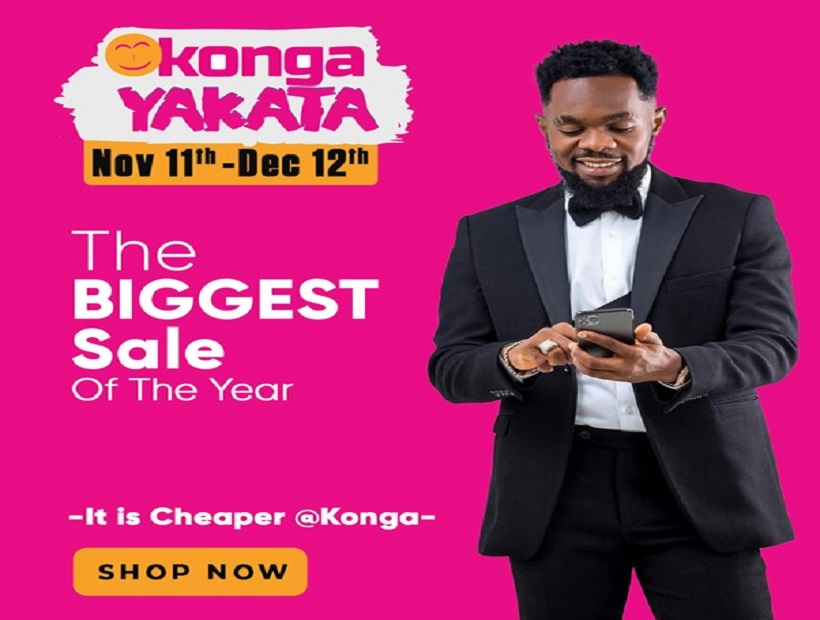 Excitement has heightened among shoppers as this year’s edition of Konga Yakata approaches its climax on Monday, December 12, 2022, amid expectations of a rain of last-minute deals for customers.

Konga Yakata, the Black Friday sale of Nigeria’s leading composite e-commerce giant, is widely regarded as the biggest sale of the year in the annual shopping calendar in Nigeria.

Feelers from within Konga indicate that the management of the company has put together a campaign-ending range of special offers as the countdown begins to the end of the promotion on December 12.

This comes against the backdrop of requests from some quarters for an extension to the end-date of Konga Yakata 2022 to accommodate customers who often commence their festive season shopping late.

However, sources at Konga are optimistic that while there may not be an extension in date, shoppers would be compensated with more juicy deals, discounts and offers across major product categories in the days leading to the end of the promotion.

‘‘We, therefore, expect to see increased shopping activity from this week, especially as salary earners get paid and many of them prepare to intensify their festive season shopping and with an eye on good prices, while looking to avoid the usual rush that accompanies the period,’’ disclosed Chief Executive Officer (CEO), Konga Group, Prince Nnamdi Ekeh.

‘‘Trends-wise, we have regularly seen a situation where customers leave their shopping till the last minute, even at the risk of missing out. But we understand that this time, factors such as the current global economic situation, which Nigeria and Nigerians are not immune to, may have played a part.

“Consequently, we have decided to make available some extra juicy offers for the last two weeks of Konga Yakata as a gesture for last-minute shoppers,’’ Prince Ekeh stated.

The 2022 edition of Konga Yakata, a much-anticipated month-long shopping fiesta, which kicked off on Friday November 11 and will run through Monday, December 12, 2022, has witnessed a feast of sorts for customers of Konga.

In addition to the deluge of massive discounts on a wide range of products, shoppers have equally been treated to many other mouthwatering incentives such as Treasure Hunts, Flash Sales, Happy Hour Deals, bundled offers and an assortment of Black Friday packages including Budget Store, 10k Bar Shop, 6k Gadgets, Weekend Spree and much more.

Meanwhile, facts on ground have also revealed that shoppers have also defied the prevailing difficulties in the local economy by finding ways to continue shopping, despite the current economic downturn, through targeting high-value deals on Konga Yakata.

As a result, shoppers on Konga have bucked the trend, particularly those presented by analysts and market watchers predicting that more people are expected to drastically cut down on spending due to inflation. Investigations reveal that rather than shy away from shopping, Nigerians have instead chosen to rely on Konga Yakata to shop smarter by targeting value-adding deals.

The development has resulted in a surprising rise in traffic and shopping sessions on www.konga.com within the first 12 days of the campaign as bargain-hungry Nigerians scramble for special offers and best-priced deals at Konga.

The spill-over effect has also extended to Konga’s physical stores located across Nigeria, with increased foot traffic recorded in major sites including Lagos, Abuja, Port Harcourt, Kano, Owerri, Enugu, Uyo and Warri, among others backed up by a surge in retail sales.

The curtains will fall on this year’s edition of Konga Yakata on Monday, December 12, 2022.