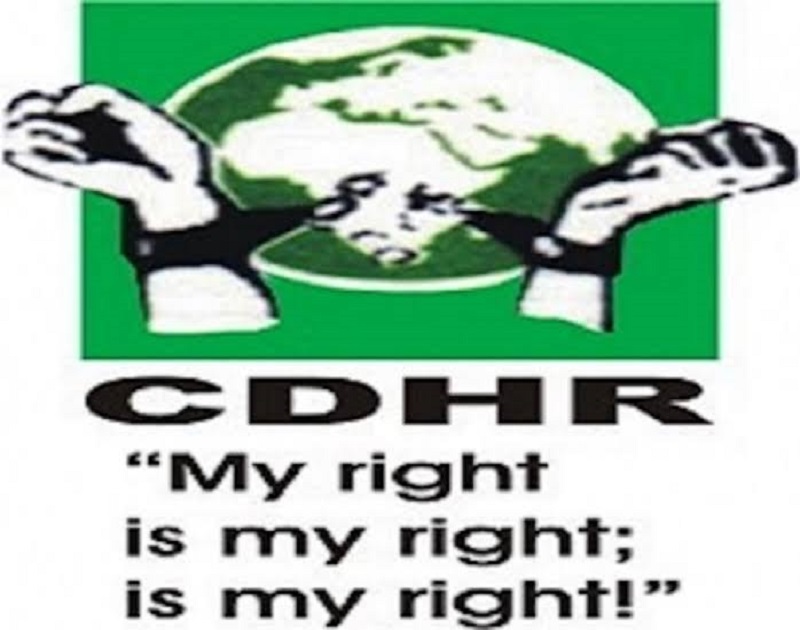 At an exhaustive deliberations by the delegates at the 2022 Annual General Conference, AGC, of the Committee for
the Defence of Human Rights, CDHR, which held on November 5, 2022 in Lagos, leadership of the organization, in a unanimous resolution, frown at the unevenness of Nigeria democratic governance under the leadership of President Muhammadu Buhari of the ruling All Progressives Congress, APC.

In his presentation, President of CDHR, Dr. Osagie Obayuwana, expressed concerns about the deterioration in the pervasive insecurity of Nigeria as well as the ever widening gap between the rich and the poor and the concentration of wealth in the hands of a minute minority of the populace including the embarrassing scale of crude oil theft under the watch of security agencies.

Other speakers who added their voices to the downward trend in the quality of management of public affairs; subsidy scam; non-functioning and non-participatory nature of the budget making process etc were
the keynote speaker and special guest of honour, Comrade Abiodun Aremu; Chairman, Board of Trustees, Mr. Femi Falana, SAN; immediate past President and member of the Board of Trustees, Comrade Malachy Ugwummadu and Comrade Debo Adeniran, Secretary Board of Trustees.

In their collective submission, they decried the terrible consequences of the failure of governance.

In a communiqué signed by Dr. Osagie Obayuwana, National President, CDHR Nigeria and made available to the National Association of Online Security Reporters, NAOSRE, by Comrade Idris Afees Olayinka, National Publicity Secretary, CDHR Nigeria, the organization unanimously called on the federal and state governments to adopt social and economic measures that would bring reliefs to the teeming populace as a panacea to insecurity, insurgency, banditry, kidnapping and armed robbery.

They also called on the Buhari government to adopt policies designed to address the over 20 million out of school children in Nigeria, who, by law, are guaranteed the right to education.

CDHR demanded proactive steps in the combat of flooding and the realization of the goals for which the ecological fund was set up as well as a thorough audit of the funds to bring to book all those who may have partaken in the looting since it was established.

They noted that the calamity that befell numerous communities in different parts of the country on account of the recent flooding, is directly traceable to negligence on the part of the federal government of Nigeria and demanded immediate equitable compensation to all the families who lost their loved ones, their homes and means of livelihoods.

On budget, CDHR condemned the non-participatory nature of the budget-making process throughout the two tenures of Buhari presidency, whereby notable interest groups like the labour movement, civil society and professional groups were not accorded the opportunity to participate in the formulation implementation and monitoring of budgets through which Nigeria’s collectively owned resources and put to use.

In like manner, CDHR also condemned the perchance and refusal by various governments at all levels in Nigeria to pay lump-sum gratuities to pensioners, in some instances for as long as 20 years after retirement.

The organization stressed that this treatment of senior citizens who are 80 years and above is not only callous, but is crime against humanity.

They frowned at the continuing non-payment of the minimum wage in various States of the federation contrary to the Minimum Wage Act especially in the face of the worst inflationary rates ever witnessed in Nigeria and reaffirmed the right of all persons in Nigeria to enjoy Social and Economic Rights without discrimination including but not limited to housing, healthcare, job etc.

On the 2023 general election, CDHR resolved that periodic elections are important from the point of view of the oppressed in Nigeria, only in so far as they relate to the enjoyment by the majority of the
citizenry, of socio-economic rights.

“These issues must be the anchor by which political parties and candidates are to be adjudged worthy or underserving, using past records as a guide. The ballot box is to be used to advance this fight, without any illusions about the 2023 elections in particular.

The organization leaders used the occasion to inaugurate the Kano State branch and charged members to build more units in neighbourhoods in the existing branches of the CDHR, and to establish more branches in all parts of the country, especially in the Northern part of Nigeria,” CDHR said.

They urged members nationwide to immerse ourselves in the struggle to defeat misrule, and end violation of rights in Nigeria.