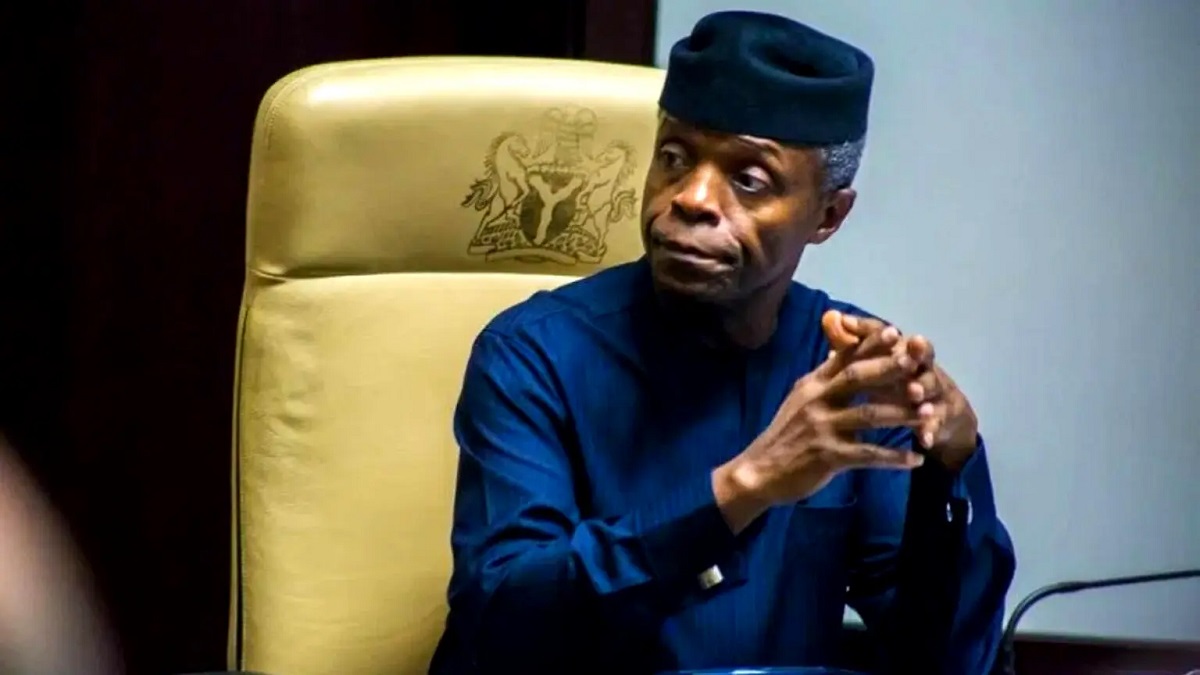 Vice-President Yemi Osinbajo says the African Continental Free Trade Area (AfCFTA) is a unique opportunity to consolidate Africa’s large market, which will address the economic challenges of the continent.

Osinbajo made the assertion at a hybrid International Conference on Africa’s Economy at Newark, New Jersey, with the theme, “African’s Economy: The way Forward,’’ organised by Global Patriot Newspapers.

“For instance, with the agricultural sector accounting for about 23 per cent of the continent’s Gross Domestic Product (GDP), the sector is regarded as the key to the overall productivity of the African economy.

“This is why we must improve our agricultural productivity; we must produce our own food and reduce import dependency for key commodities.

“We must also adopt policy actions to create an environment in which businesses can thrive, starting with the adoption of the right type of macroeconomic and industrial policies,’’ he said.

The Vice-President, who spoke on the theme of the conference, insisted that AfCFTA was the way forward for the African Economy, based on its objective to create a single market for the economic integration of the African Continent.

“With a population of about 1.3 billion people, by leveraging the many opportunities provided by AfCFTA, we can provide more jobs for our teeming youth population.

“We can create the Africa we want by significantly boosting intra-Africa trade, in particular, trade in value-added production and trade across all sectors of Africa’s economy.

“We can truly then transform our continent into a global powerhouse,’’ he said.

According to him, Africa is the last frontier for economic development, and it has the potential to be a global growth pole and AfCFTA is the leverage to benefit our individual countries and the whole Continent.

The vice-president said with an estimation of potential income gains in Africa of up to $450 billion dollars by 2035, it could be a game changer for African economies.

“Already our young people are showing us that it can be done.

“Between 2016 and now, and in the middle of two recessions, Nigeria now has at least six unicorns – that is tech companies with a valuation of over $1 billion dollars.

“It does show you how much energy and how much traction the whole technology space is gaining. This energy can be replicated across the board in every area of our economy through the AfCFTA,’’ he said.

He, however, said the challenge of rebuilding our economies was a task that we must undertake with an urgent sense of purpose.

“The AfCFTA is expected to bring about a number of benefits to producers, consumers and countries alike.

“The hope is that African producers would benefit from access to cheaper inputs and intermediate goods as well as larger markets for their products while consumers have access to cheaper goods and a broader variety of products.

“And we need to be proactive to reap the great benefits of participating effectively in the AfCFTA.

“African economies can experience gains from trade and further benefit from removing the onerous requirements of belonging to multiple and overlapping trade agreements within the continent,’’ the vice-president said.

In addition, Osinbajo said going by the estimation of the UN- Economic Commission for Africa, with full liberalisation, intra-Africa trade was expected to increase by 52.3 per cent as compared to a baseline scenario without AfCFTA by 2022.

He said with such an increase, African economies individually as separate countries, and the continent as a whole, would benefit from the growth that often accompanied increased trade flows.

“Recently, at the end of September, Rwanda reportedly exported its first consignment of goods under the African Continental Free Trade Area (AfCFTA) agreement to Ghana on Friday, Sept. 30.

“The first consignment of coffee from Igire Coffee Limited was flown to Accra, marking the formal start of preferential trading under the AfCFTA agreement.

“It is just a glimpse of the limitless opportunities for the industrialisation of Africa that is possible and for which AfCFTA can be the vehicle.

“So, governments across the continent must take the right policy actions to actualize them. Such actions include the protection of local industries and improving value chains,’’ Osinbajo said.

According to him, an important objective of the AfCFTA is to overcome the economic fragmentation of the continent by bringing the regional economic blocs together in a common arrangement.

“This being the case, African countries should look to negotiating trade treaties with other parts of the world on the basis of AfCFTA rather than through arbitrarily designed regional blocs.

“African countries should not allow themselves to be lured into arrangements which do not serve their long-term and overall development objectives,” he said.

The News Agency of Nigeria (NAN) reports that the conference had in attendance dignitaries, including the Permanent Representative of Nigeria to the United Nations, Amb. Tijjani Muhammed-Bande and Consul General of Nigeria in New York, Amb. Lot Egopija.

Other key speakers at the conference included the Chairman of Stanbic IBTC Bank PLC , Mrs Sola David-Borha and Rev. Monsignor (Dr) Anselm Nwaorgu of the Catholic Church in New Jersey.