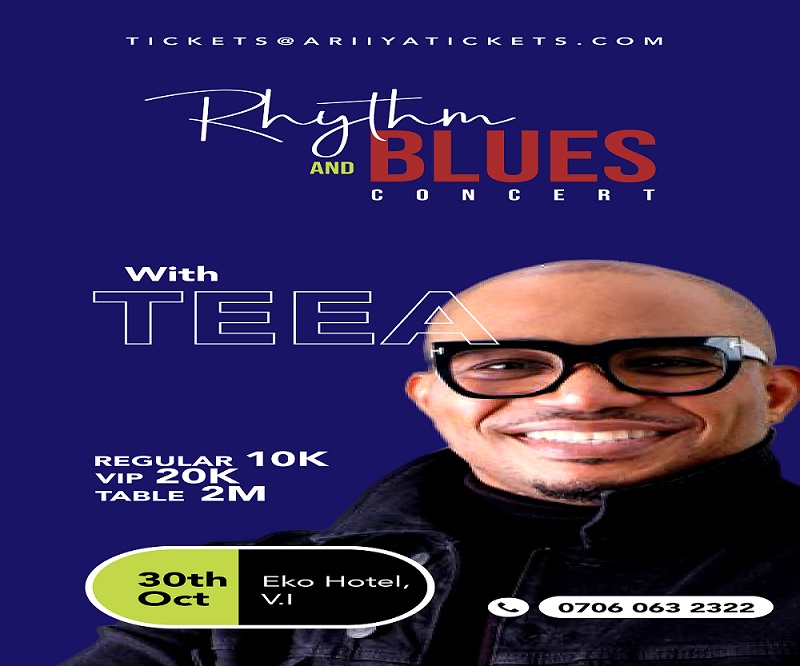 Multiple award-winning comedian and pioneer of standup comedy Tee-A will host a slew of Nigerian R’n’B royalties at his upcoming Rhythm and Blues Concert scheduled for the fourth quarter at the Eko Hotel and Suites.

Chike, Cobhams, Styleplus, PRAIZ, Alternate Sounds, and Iyanya, will be recorded as the debut headliner in the concert’s history that will annually celebrate the unique and classic rhythm and blues sounds originating from Nigeria.

Doubling as the show’s director, Tee-A, yet again, is set to record another successful production in the annals of the Nigerian entertainment industry following his highly successful shows: Live and Naked and Tyme Out with Tee-A.

Serving as an Ode to the R’n’B genre, the ace comedian whose career spans various other fields such as writing, presenting, as well as being an entrepreneur, noted that the R’n’B genre has played a significant role in the advancement of other music genres that have become mainstream today.

“Almost every music has an R’n’B background or influence, and Afrobeats is not an exception. A lot of today’s music has a very strong R ‘n’ B influence in it,” Tee-A revealed.

He further disclosed that the goal of the concert is to attract lovers of the genre to relish exhilarating music experiences alongside their favourite Nigerian star dating back to as far back as the early ’90s.

Speaking about the motive to establish the platform, Tee-A said, “I have always been a huge fan of Nigerian and international R ‘n’ B music and I feel that we should showcase and celebrate our big R ‘n’ B stars too to the world.”

Although the concert is designed to attract music lovers and musicians, it equally promises to be a high-octane event attracting high-value corporate and private clients from across the globe, providing a once-in-a-lifetime chance for musicians, and stakeholders to get into partnerships.

“The entertainment industry in Nigeria has evolved rapidly over the years with a substantial amount of it now being exported across the globe. It is therefore important to give music fans at home an event to remember annually,” he said.

To properly execute the project, Tee-A is leveraging the excellent track record and professional expertise of First Class Entertainment, a multimedia production company he founded in 2000. A truly Nigerian company, the outfit produced his highly successful debut and Nigeria’s first ever one-man comedy concert series Tee-A Live and Naked.

With many accolades to its name, the creative hub has received acclaim for its works on Tymeout with Tee A, a late-night TV show, and the Eko Comedy Festival.

The company which also handles media production services to various corporate and private client’s recently pioneered a monthly event for young professionals every Friday of the month tagged Showtyme Friday’ at Terra Kulture.

By and large, Tee-A is confident of the impending success of Rhythm and Blues Concert, saying “it would be an experience like never before. This one is for us. A celebration of classic live music.”

Tickets for the concerts are available on Ariiyatickets. More details about the concert headliners will be announced across all media platforms in the coming weeks.