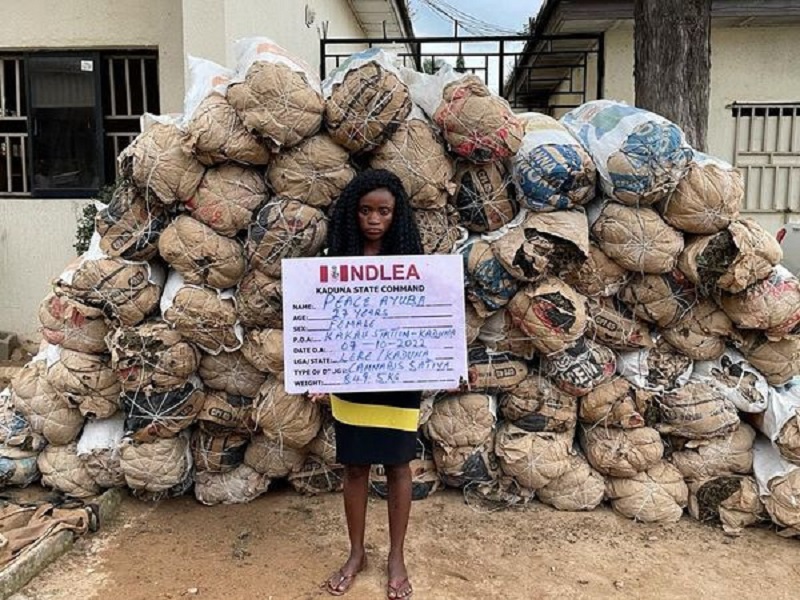 The operatives of the National Drug Law Enforcement Agency (NDLEA) have arrested a female drug dealer with seventy-eight bags of cannabis sativa in Kaduna.

The Director, Media and Advocacy, NDLEA, Mr Femi Babafemi said this in a statement on Sunday in Abuja.

Babafemi said that the suspect, Peace Ayuba was arrested on Friday, Oct., 7 at Kakau Gonin Gora, Kaduna State with the drugs weighing 849.5kgs.

He said that operatives of the NDLEA also arrested Onyeka Owo, 28, with 443 bottles of codeine based syrup in Sokoto state.

In another development, 10 months after his arrest by NDLEA, a notorious drug dealer in Alaba Rago area of Ojo, Lagos, Alhaji Surajo Mohammed had been convicted.

Babafemi said the suspect was sentenced to seven years imprisonment by a Federal High Court in Lagos state presided over by Justice Yellin Dogoro.

“In his judgment delivered on Thursday Oct., 6 2022, the Judge, however, gave the convict an option of seven million naira fine, “he said.

Babafemi quoted the Chairman, NDLEA, retired Brig. Gen. Buba Marwa as urging officers and men of the agency across the country to remain steadfast.

Marwa also urged them to remain resolute and unrelenting until the last gram of illicit drugs was taken away from the streets of Nigeria.