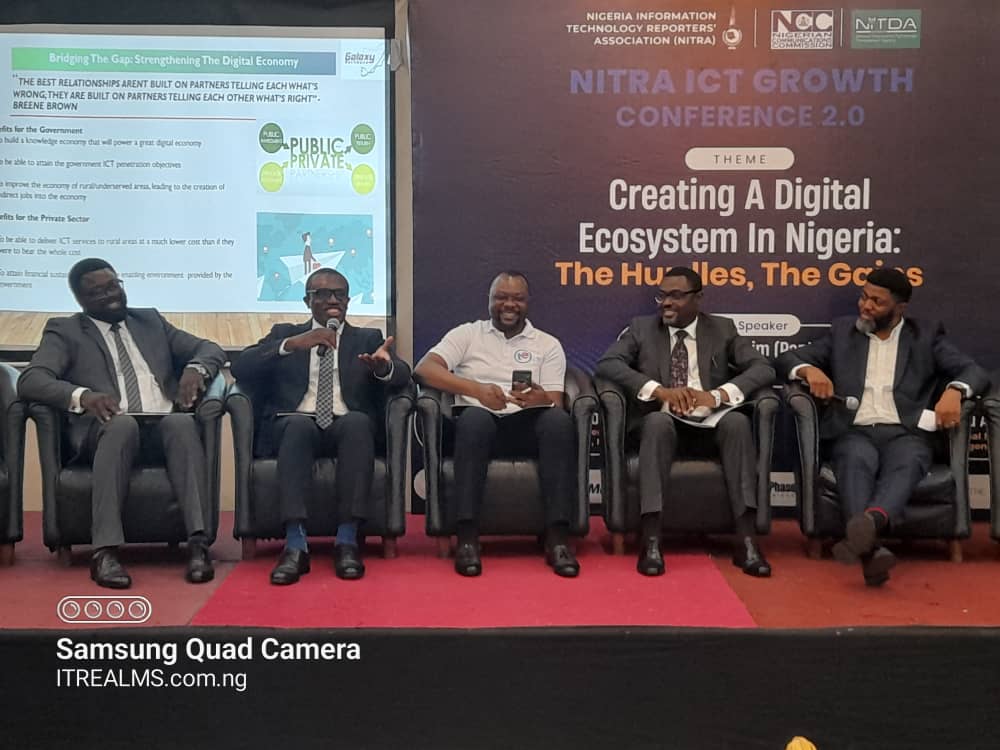 Panelists at the just concluded NITRA ICT Growth Conference 2.0, have emphasized the need for an urgent review of Nigeria’s state of infrastructure so as to position the country to massively reap the benefits of a digital economy as obtained in some developed nations of the world.

Themed ‘Creating a Digital Ecosystem in Nigeria: The Hurdles, The Gains,’ the panelists drawn from both the public and private sector establishments, were of the consensus that infrastructure provisioning remained Nigeria’s surest pathway to building a robust digital economy.

At a second panel session during proceedings at the NITRA flagship technology conference held at the Oriental Hotel, Lekki Lagos, and moderated by Mr. Peter Oluka, Editor of TechEconomy.ng, the panelists agreed that efforts at building Nigeria’s digital economy cannot yield the much-desired fruit unless there is sustained commitment on the part of the government to prioritise the provision of infrastructure.

He stated that since governance has now been replaced by electioneering campaigns in preparation for the 2023 general election, the incoming administration should be focused, identify a particular infrastructure, and fix it, and expressed the hope that if in this regard, power is given priority attention, a lot of things will follow suit.

Kelechukwu Nsofor of Rack Centre, a carrier-neutral Tier III data centre who spoke from a data centre provider’s perspective, said power is the key infrastructure that drives a data centre business, describing it as basically the livewire of any data centre.

According to Nsofor, “The key infrastructure that we rely on is power. Power is basically the livewire of any data centre. Unfortunately, if you go back to 1999 since we started the current democratic dispensation in the country, what has been the installed capacity in terms of power? 20 years down the line, where are we today in terms of power?

“At a point, we were generating 1600MW, today, it’s still hovering around 3000MW. Where does that leave us as an economy of over 200 million people? So, if you look at the population growth rate and try to compare it with what we are growing in terms of power, you see that there’s a total disconnect.”

He said that Nigeria is blessed with a rich reservoir of policies and knowledge expertise but expressed worries that this has not been translated to results in the country’s power industry.

“Now, tying that to Rack Centre and indeed the data centre space, we have been generating our own power in the last nine years that we have been operating. And we’ve been fully in control of generating that power now. As we look to expand, we are also looking at ways where we can continue to generate power or do it more cost-effectively.

“We would like a situation where the government will actually stop the lip service that goes into infrastructure like power and actually start showing serious commitment by playing a major role in the provisioning of power infrastructure,” he said.

Noting that the digital economy is all about using the internet basically to push economic activities, Nsofor stated that what is critical even with the efforts at bringing in foreign direct investment, all the marine cables sitting on the coast of Lagos, is how to work with the private sector and knowledge experts basically on how to get things like multiple taxations and right of way out of the road.

“Operators can now push that capacity where it is actually needed. This will help us increase internet penetration, increase the digital economy growth, and push the economy forward,” he concluded.

In his contribution to the discourse, Babalola Olalekan of Phase 3 Telecoms admitted that the government was doing enough to provide infrastructure but stated that there was a need for stronger synergy between the government and service providers.

“There was a document released last year called Strategic Roadmap/Action Plan: A four-year plan 2021-2024. The key performance indices released in that document classified infrastructure in such categories as soft, service and hardware.

“Another area we have taken advantage of is the concession plan we call public-private partnership (PPP), where I expect the operators and players to key into and take advantage of our existing infrastructure, and opportunities.

“Another thing I will encourage we should be doing is a collaboration among players. All of us can only fight about a particular position or location. We can join hands on how to collaborate, leverage each other, and supply as a single network.

“So, I think the government is doing enough with policies. The onus is on us to tap into it, put more pressure on the government and be more up and doing in our collaborative efforts and take advantage of what is available to us through the government,” Olalekan said.

He said that going into the 2023 election, the most important thing to be focused on is security, stating that operators have many works to do out there in the field yet, they find it difficult to restore the network in the shortest possible time. “So, whatever government can do to make sure that our roads, our villages, our towns are secured, we will surely have a good general election.”

Chidi Okpala of Galaxy Backbone, in his intervention, acknowledged the fact that government understands the importance of infrastructure in growing the country’s digital economy, noting that one of the things the current administration holds dear to its heart, is infrastructure.

“Have they done all the things expected of them as government? Maybe not. But have they made some efforts in bridging the infrastructure gap? The answer is yes. But there is a whole lot of learning, a whole lot of training in trying to create that awareness, into fully understanding how this impacts the day-to-day living of everyone.

“As an organisation, what we are trying to do is to bridge that gap of understanding especially, people in leadership level in government; to let them understand this is what this infrastructure stands for, this is what it is all about. It is not just for sending emails but how it affects your life, your family, and the work that you do.

“We have done quite a lot together with some of the other organisations within the information technology space in the public sector. We are still doing a lot to raise that awareness of what this infrastructure means so that people can understand more and collaborate more.

Okpala expressed the need for policymakers to be much more intentional about what the country is doing, how it the affects everyone, and how the efforts at building the country’s digital economy can be sustained.
The session, which was anchored by the Editor of TechEconomy, Mr. Peter Oluka, was unanimous with its position that infrastructure is the bedrock of ICT development and global competitiveness in Nigeria.