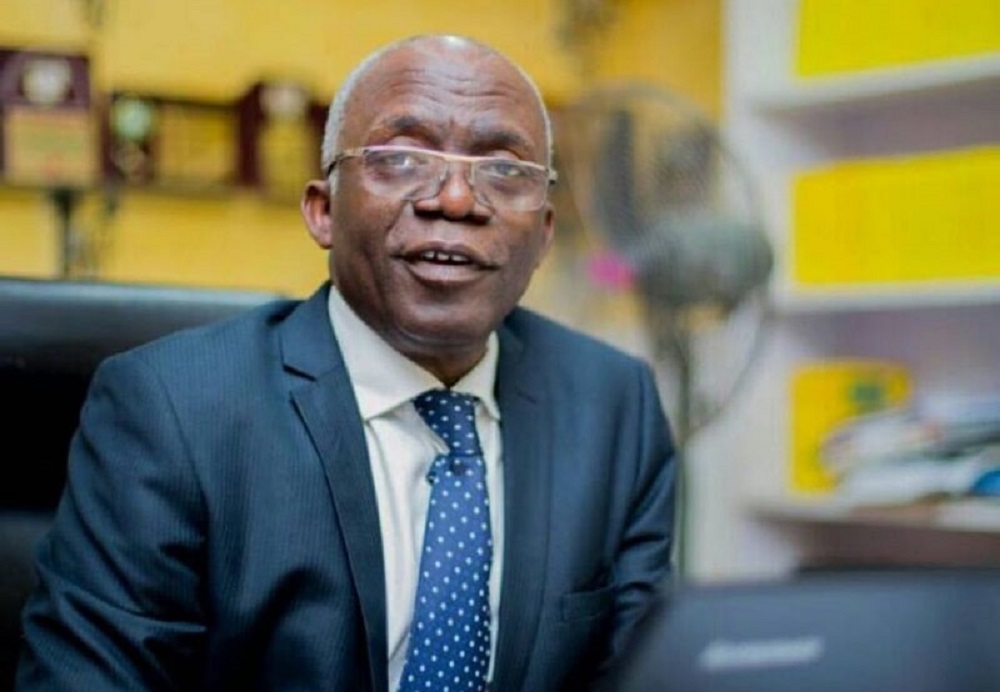 I have followed with interest the case of what appears to be an attempted blackmail by your client, Mr. Benjamin Joseph of Citadel Oracle Concepts Limited, an Ibadan-based ICT retail firm against the Zinox Chairman, Mr. Leo Stan Ekeh, his wife, TD Africa and staff and Access Bank Plc. for some time now as a disinterested observer.

However, I was recently moved to take an interest in the case after a lawyer friend of mine went to great lengths to verify from the facts on ground from the respective authorities. Now, I am moved to comment following what I consider an unacceptable media slander to denigrate the character of the Zinox owner.

The only sin Mr. Ekeh’s company committed is extending documented interest-free credit facility to your client when he couldn’t fund an IT supply business which the Federal Inland Revenue Service (FIRS) awarded his company and 12 other companies. After the FIRS paid all suppliers funded by Technology Distributions Ltd. (TD Africa), other companies paid TD the invoice sum of the laptops supplied on credit to them as agreed.

However, your client tried to divert TD’s fund.

It is important to state here that your client’s application for credit was initially rejected based on lack of credit history with TD. However, his partner, Princess Kama and her uncle, one Chief Onny Igbokwe, a long-time customer of TD’s, intervened on his behalf.

Therefore, when he tried to hold back remitting the funds for the laptops supplied on credit by TD, his partner, Princess Kama who, handled the transaction on behalf of his company (he issued a letter of authority to Princess Kama as his company’s legal representative and submitted it with a copy of his passport to the FIRS) refused as the credit was guaranteed by Chief Igbokwe. After TD was paid, your client Benjamin Joseph started fighting his partner, Princess Kama, on profit share which lasted two years and was at a point handled by a distinguished lawyer – Chief Afe Babalola – who pleaded with Princess Kama to consider increasing the profit share due to Benjamin Joseph a little bit, but your client wanted all.

It was at this point that your client changed the story that he was not aware of the contract and that his company was used to defraud the FIRS, adding that nothing was supplied to the FIRS. This, I understood, was in order to try and blackmail the owners of TD to extort money from the company. He sponsored some fake press releases against the Zinox Chairman, his wife and Access Bank so that he could have access to Mr. Ekeh. When he visited Lagos from Ibadan to meet Mr. Ekeh on one occasion, the Zinox Chairman refused to see him because he was classified a blackmailer.

Your client had initially reported the case to the Police Special Fraud Unit (SFU) Milverton Road, Ikoyi. The SFU conducted investigations and indicted him on the basis that a forensic analysis report stated that he signed the board resolution which he said was forged. He thereafter lodged another petition to the Police Headquarters, Abuja, who after investigations and confirming that he was lying, charged him to court in 2016 in suit CR/216/2016 (IGP vs. Benjamin Joseph) for false information before Honourable Justice Peter Kekemeke. The Police (Prosecution) has since closed their case since 2018 and your client is supposed to open his defence.

Instead of defending himself, he is running around with your help, to have the Attorney General to discontinue the criminal case against him. My investigation at the Ministry of Justice revealed that your chambers once applied to the AG with a letter dated November 1, 2018, for a Fiat, which you invariably wanted to use to discontinue the criminal proceedings against Benjamin Joseph, so that he would not defend the criminal charges against him. But the AG refused that your 2018 application. Thereafter, your client went to procure some spurious “reports” said to have been made in 2015 and in 2020, which you, again, used to apply for another Fiat.

But my further investigations at the Force Headquarters Abuja shows that the Police have, by a comprehensive report dated December 1, 2020, discredited and disclaimed all those “reports” which your client is parading and with which you tried to get the Honourable AG to grant you a Fiat in May 2022. However, when the AG further reviewed the file and saw through the discrepancies in your application for the Fiat, the AG reversed himself and issued a new letter to the Police dated 6th June 2022, directing the Police to prosecute your client, Benjamin Joseph, to a logical conclusion. For instance, your chambers failed to disclose to the AG that there is a subsisting judgment of the FCT High Court in Suit No.  FCT/HC/CR/244/2018, given by Honourable Justice Danlami Senchi on 24th February 2021, against your client to pay N20million as damages for false petitioning and to serve as a deterrent against persons who would give Police or the EFCC false information as your client did. This was following the petition your client made on same set of facts and allegations to the EFCC through the Vice President.

Yet, you are applying for Fiat to prosecute the same persons your client is asked by a subsisting judgment to pay N20million as damages!    That same judgment absolved these same persons of all the allegations made by your client.

I would also like to point out that the Federal Government, through the office of the Attorney General of the Federation and Inspector General of Police have instructed the court to prosecute your client, Mr. Benjamin Joseph to logical conclusion, with letters dated 6th June, 2022 and 26th September, 2022 respectively, for false information at the FCT High Court, before Honourable Justice Peter Kekemeke. Yet, the latest release being circulated by your client states that you are filing charges against Mr. Ekeh, Mrs. Ekeh, Chris Eze Ozims, Shade Oyebode and other persons named in the publications.  Meanwhile, your client was in court on the 27th of September 2022 and the letter of the AG dated 6th June 2022 and the letter of the IGP dated 26th September 2022, to continue the prosecution of your client were already in the court file. Your client was called upon to give evidence for his defence. He could not defend himself but rather sought an adjournment.

Yet, your client quickly rushed to the press on the 29th (2 days after) to blackmail innocent persons with reckless allegations contained in various online publications. All these acts are capable of making one believe that they are not directed to meet the ends of justice but just to embarrass and humiliate Mr. Ekeh, the Chairman of Zinox, his wife, and his staff.

It is libellous to insinuate that a distinguished tech entrepreneur who has built the largest ICT group on the continent, as well as his wife and few others have been indicted by Police and EFCC. It is all false. The release indicated that the Police SFU and the EFCC indicted Mr. Ekeh, Mrs. Ekeh, Mr. Ozims, Mrs. Oyebode, Mr. Adigwe. Could you please release these reports from the SFU and the EFCC to the public for us to read? I have made enquiries at EFCC and the Police Headquarters to confirm this claim and both confirmed there was no such invitation and indictment. The spurious Police reports which your client is parading were not made by the SFU who investigated the case. Your client rather procured a certain “report” from a Police agency in Abuja, which did not investigate the case and which the Police Headquarters Abuja has disclaimed in their FINAL report dated 1st December 2020 on this matter. Yet, your client is parading these fake and discredited reports. I am sure you know that your client who reported cases has been unable to substantiate and defend the case he reported at the courts till date and is instead begging the Attorney General to withdraw the case. I have taken the pains to give you specific dates of letters and reports and particulars of all the cases, to demonstrates the truthfulness of my findings. Anybody can thus verify them.

For your information, Technology Distributions (TD Africa) which is run by Mrs Chioma Ekeh, a first-rate Mathematician, FCA, MBA is the largest ICT products distribution company in the sub- Saharan Africa and has a revolving credit to ICT vendors of $75m in the last eight years. This was why your client could be extended an interest-free credit to execute the job for which he could not secure a bank loan. Mr. Ekeh and his Board are persons of integrity and please feel free to confirm this from industry players. Yet, he sponsored a publication which states that 12 persons including Access Bank conspired to defraud him of N170m. Are they hungry as to collectively tarnish their integrity with a mere N170m contract?

Indeed, your client owes an apology to Mr. Ekeh, a serial digital entrepreneur and well-known promoter of trust economy and digital democracy, who I consider the main target in this charade. Let me share a few facts.  In the last 35 years, he has built the largest ICT group in Africa with companies in four continents without borrowing a kobo or owing any bank for that matter (please check with Nigerian banks). He believes he is a child of trust economy and has succeeded with it. His companies have executed the biggest ICT projects in Africa and some Arab countries and so not desperate to cheat any person. His companies also employ thousands of quality Nigerian staff. He may be extremely humble but not stupid.

Mr. Ekeh enjoys the privilege of being the only African with revenge insurance (please check global database if you are given access). He is humble to a fault and that is why he is tolerating your client. He once told his friend after investigating your client with paid foreign detectives that Mr. Joseph is broke and working as small blackmailer for competitors to some of his companies and that it was a waste of time looking in his direction.

Finally, Mr. Falana, I would like you to ask that if the claim made by your client in that publication are substantiated, please publish the court, Police and EFCC report that indicted Mr. Ekeh, his wife, and all the other names mentioned including Access Bank. If you have this evidence, I shall apologize to you publicly for seeing the publication by your client as a cheap blackmail.

I believe that irrespective of how long it takes, justice will eventually have its way in this long-drawn case.