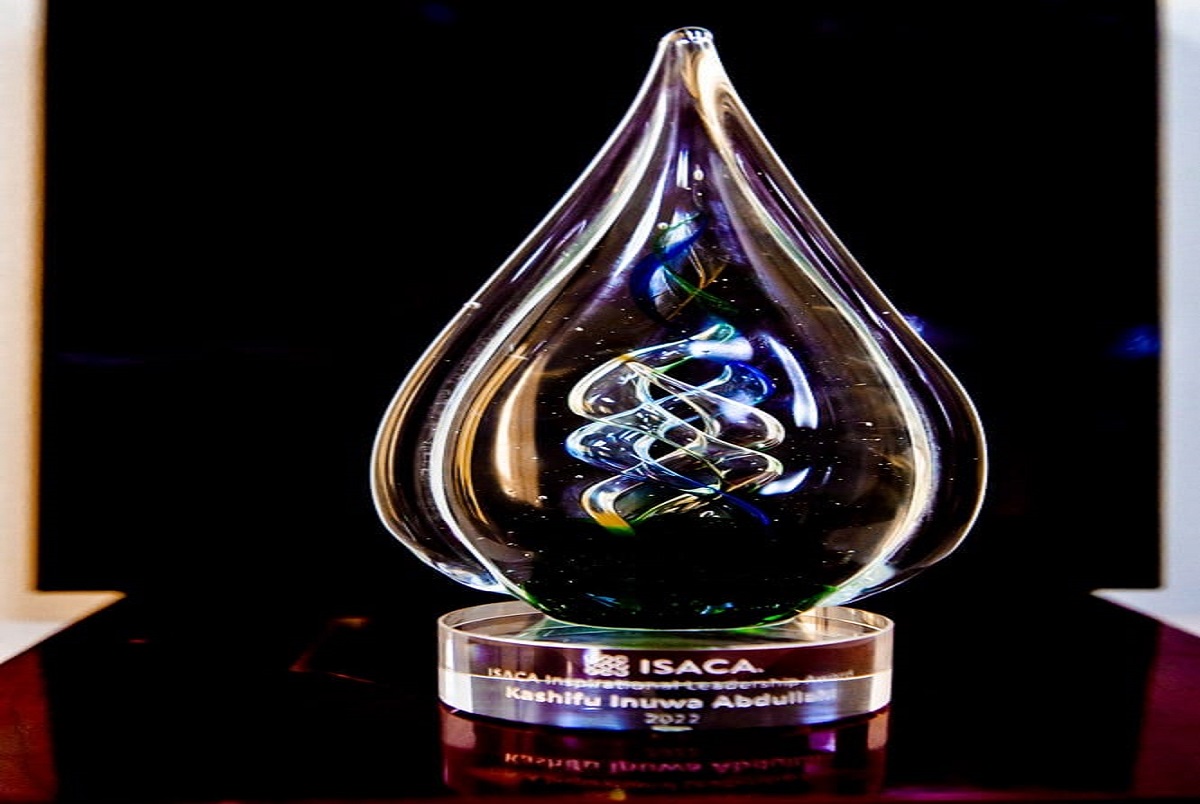 Kashifu Inuwa, Director-General of the National Information Technology Development Agency (NITDA), has received the prestigious ISACA Inspirational Leadership Award; the highest Awards presented by ISACA for distinguished service, exemplary achievements and contributions to advancing technology worldwide.
Inuwa is the only one from across the world that was given the highest “Inspirational Leadership Award” as other lesser categories of the awards were however given to some other people from different continents.
The international recognition which is among four categories of Awards administered recognizes Inuwa for his visionary leadership and efforts in bridging the digital divide by providing rural areas and Schools with Computers, Information Technology (IT) Infrastructure and Digital Libraries.
The award was presented to the DG during a virtual Gala; an event which celebrated the distinctive and incredible achievements of notable individuals and organizations across the world.
According to the organizers, by acknowledging the individuals and achievements that have a positive impact on the global society, ISACA seeks to inspire future generation2022 ISACAs of business and technology professionals.
ISACA Abuja also was given “Outstanding Chapter Award”.
While lauding the doggedness of the Honourees’ achievements toward connecting with underserved communities or underrepresented individuals, the organizers particularly described Inuwa’s commitment to bridge the digital divide and inspire organizations and professionals to advance and adapt within a digital world as exemplifying ISACA’s purpose and leadership.
Kashifu Inuwa, Director-General of the National Information Technology Development Agency (NITDA), who was appreciative of the Award, pledged his continuous determination towards accomplishing NITDA’s mandate and supporting the Federal Government’s drive of achieving a digital Nigeria.
In addition to honouring the 2022 ISACA Award recipients, the inaugural live Awards Gala also celebrated the convergence of music and technology where virtual attendees gathered online from around the world to experience similar entertainment, networking and celebration of the Honorees’ achievements.
Although, formerly known as the Information Systems Audit and Control Association, ISACA, an international professional association focused on Information Technology (IT) Governance now goes by its acronym only.
ISACA originated in United States in 1967, when a group of individuals working on auditing controls in computer systems started becoming increasingly critical of the operations of their organizations.
They identified the need for a centralized source of information and guidance in the field.
Research shows that ISACA currently serves more than 140,000 constituents (members and professionals holding ISACA certifications) in more than 180 countries.
They work in nearly all industry categories as there is a network of ISACA chapters with more than 200 chapters established in over 80 countries.
Chapters provide education, resource sharing, advocacy, networking alongside other benefits.

MTN Named the Most Compliant Listed Company on the NGX

2023 Elections: How Meta is Working to Promote Election Integrity in Nigeria

How African Teams Have Fared at the Qatar World Cup

Ghana and Uruguay are out of the 2022 World Cup

Umar Farouk, National Secretary of the Labour Party has declared the expulsion of Doyin Okupe, the Director-General of the party’s presidential campaign council, by...

Ahead of the 2023 general elections, the Independent National Electoral Commission, INEC has fixed dates for the collection of Permanent Voter Cards PVCs. INEC...

The Abuja-Kaduna rail corridor would resume duty from December 5, as announced by the Federal Government. Recall that the Nigerian Railway Corporation (NRC) had...