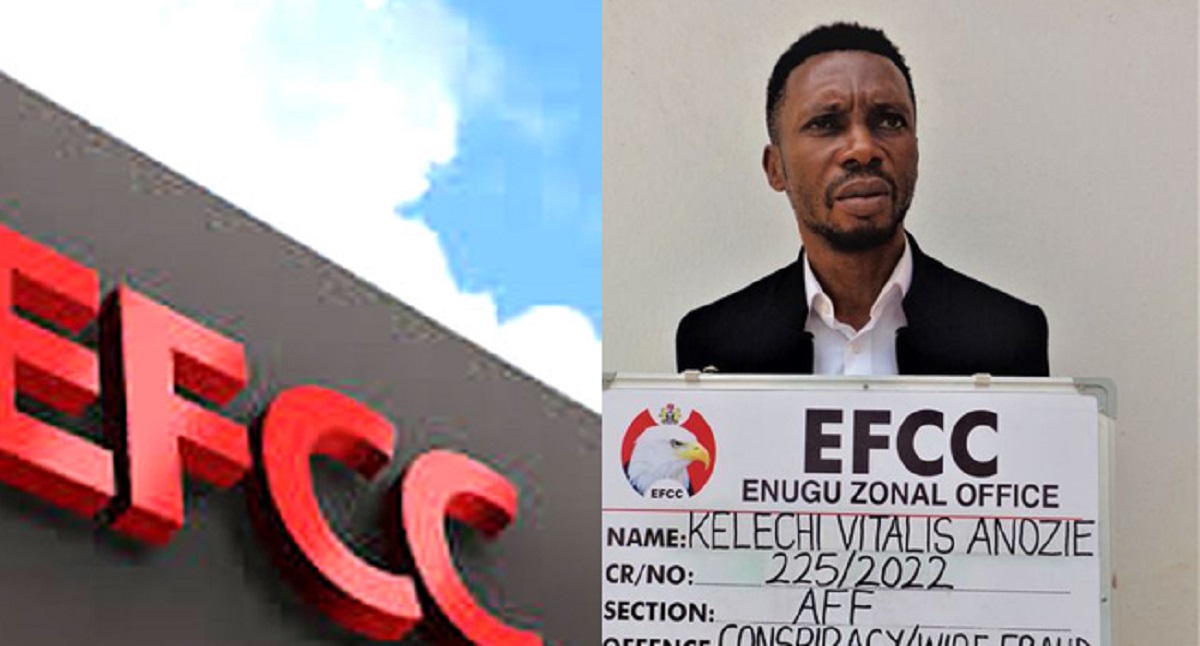 Pastor Kelechi Vitalis Anozie who is on the America Federal Bureau of Investigation’s Wanted List has been arrested in Owerri.

He was arrested by the Enugu Command of the Economic and Financial Crimes Commission.

He was however arraigned on Friday, June 3, 2022, alongside three others who are currently at large, Mr. Azubuike Ifeanyi Bright, Mrs. Amarachi Blessing Iro, and Mr. Kelechi Patrick Iro.

Anozie was arraigned before Justice I.M Buba of the Federal High Court sitting in Enugu on a seven-count charge bordering on money laundering.

According to a statement issued on Monday by EFCC’s spokesman, Wilson Uwujaren, the prime suspect was arrested at Owerri on March 10, 2022, following actionable intelligence received by the commission.

The defendant is alleged to have defrauded one F.F who lives in Illinois the sum of $135,800, and $47,000 from another American based in North Carolina.

One of the counts reads, “that you PASTOR KELECHI VITALIS ANOZIE, MR AZUBUIKE IFEANYI BRIGHT( NOW AT LARGE), MRS AMARACHI BLESSING IRI (NOW AT LARGE) AND MR KELECHI PATRICK IRO (NOW AT LARGE) sometime between 2017 and 2019, at Owerri within the jurisdiction of the Federal High Court of Nigeria conspired among yourselves to commit a felony to wit: use and taking possession of fund that forms part of proceeds of an unlawful act and you thereby committed an offence contrary to Section 21 (a) of the Money Laundering,(Prohibition) Act,2022 and Punishable under section 18(3) of the same Act.

Anozie pleaded not guilty to the charges when they were read to him. This prompted the prosecution counsel, Michael Ani, to ask the Court for a date for the commencement of trial.

The defendant’s counsel, E. Adams prayed the court to grant his client bail.

The surety must be a resident within the jurisdiction and own a property. He must also swear to an affidavit of means.

The defendant is to deposit his international passport and passport photographs with the court.